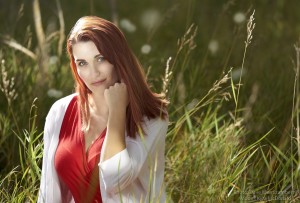 I’m back home from Calgary Alberta after presenting a 3 hour lecture at the Professional Photographers of Canada—Alberta association (PPOC-AB) annual convention. My lecture was on lighting for photography plus a whole day workshop on the same, both making one studio strobe or off camera flash do the work of many lights. The image you see of Calgary model Tyra McDonald sitting in a field of grass is one of the setups I did for the workshop. It is a technique I call simulated sunlight. Perfect for those cloudy days back in Vancouver when you need a little “sun” in your images but there isn’t any to be had. Of course on the day I’m trying to demo this technique it is full on sunny weather! So not letting the great weather get the best of me, I moved the shoot into shadows of a stand of trees in a large field next to the workshop venue. The trees blocked out the direct sunlight so I could create my own artificial strobe/flash “sunlight” backlighting—dumb I know if you think about it, but the purpose was to demo what to do on an overcast day. Anyhow, our model is backlit by either a battery powered studio strobe (easier) or an off camera flash (weaker so harder), some of the light spills past the subject striking a white reflector which acts as main light to the subject’s front. The trick to this is balancing the direct light on the back edges of the subject with the much weaker frontal light bouncing off the reflector onto the subject, it’s a game of angles where nuances rule. The front reflector does double duty acting as a gobo (go-between light blocker) to prevent the direct strobe/flash lighting from flaring the lens. The other interesting challenge, no make that problem—to hell with being positive all the time:), was to shoot with as little Depth of Field (DoF) as possible, F 4 in this case. To shoot at F 4, I needed to shoot at 1/500th of a second which is way beyond the shutter/flash sync speed of my camera. To this end I used a Lightrein (http://www.lightrein.ca/product.htm?pid=749532&cat=26432) battery powered 600 Watt second strobe with it’s HSS (High Speed Sync) feature turned on. This allowed me to sync at 1/500th of a second with no shutter cut off in the image—all or some of the image is black from shutter blocking the exposure. With HSS, the strobe pulses rapidly making many small pops from the flash instead of one big blast, during the time that the shutter is open. When you get above what is called “x-sync speed” which is usually any shutter-speed faster than 1/200th of a second (x-sync speed is any shutter-speed below 1/250th of a second), the shutter functions differently. For x-sync speeds the bottom blade descends leaving an opening for light to pour onto the imaging sensor or film while the top blade stays at top until end of exposure where then it drops down closing the opening thus ending the exposure. With speeds in excess of x-sync, both blades travels down but with a gap between them that allows light to enter. The faster the shutter-speed the narrower the gap, the slower the shutter-speed the wider the gap. In essence this moving slit “scans” the scene, so if a strobe or flash fires normally, which is to say, “once”, then only part of the sensor or film will receive light. With HSS technology the pulsing of the strobe makes it more like constant light so that every position of the “scanning shutter blades” receives the same amount of light. The only draw back to HSS is that it takes the total amount of “juice” the strobe or flash has to offer and divides it up into many small bursts instead of one big one. For instance, where I would normally get F 16 amount of light on my subject, in my tests I found that with HSS and with the shutter set to 1/8000th of a second, the breakdown of light into smaller quantities by the strobe/flash’s HSS feature, resulted in only F 4 amount of light on the subject. That’s the worst case scenario because I also observed that each consecutive slower shutter-speed would increase this result by one F-stop more light. Either way, that’s a large loss of light, but not a big deal since you really only use HSS when you want to shoot with your aperture set to wide open for shallow DoF on a bright day. All that to say, I needed HSS because even in the shade the day was too bright to shoot at F 4 with x-sync speeds. Normally on a dull cloudy day you can shoot with a wide open aperture and still be within x-sync. In the end I was able to “simulate” simulated sunlight for cloudy days on a sunny day. Now how crazy (complicated) is that?

All the best,
Dave

Discover the secrets of photography lighting so your photos evoke drama and dimension with on-demand access to Dave's suite of video tutorials, set-up sketches and more.

Master the art of photographic lighting by studying with lighting wizard, Dave Montizambert.

Book a photo-shoot with Dave